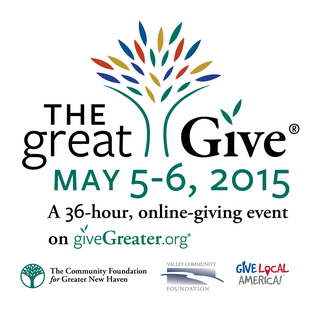 The Community Foundation for Greater New Haven (The Community Foundation) announces that $1,291,096 will be distributed to area nonprofits thanks to more than 7,000 donors who made more than 9600 gifts during The Great Give® 2015, May 5-6. This outpouring of support far surpasses the amounts raised and the number of gifts made during The Great Give® in previous years.

“Our Community’s response to The Great Give 2015 is deeply gratifying,” said William W. Ginsberg, president & CEO of The Community Foundation for Greater New Haven. “It is a tribute to the strength of our local nonprofit sector and the generosity of our community.”

The Great Give® 2015 shows that children and youth are top on the minds of area donors this year. By category, the most money ($223,682) was donated to children- and youth- serving organizations.

The Valley Community Foundation provided additional prizes during The Great Give® 2015, incentivizing residents and workers in the five Valley towns of Ansonia, Derby, Seymour, Shelton and Oxford to give locally. Nearly 1,000 gifts were made as a result, which, combined with the prize money, totaled over $172,000. VCF Grand Prize winners will be announced on May 14 at an ice cream social at St. Mary’s Church in Derby; to learn more, please contact the Valley Community Foundation at 203-751-9162 or visit their website at www.valleyfoundation.org.

“We are thrilled to see so many new and returning organizations participate in this online giving event, as well as the growing number of supporters,” said Sharon Closius, president & CEO at VCF. “Those living and working in the Valley region have truly come together in The Great Give to collectively impact and invest in our community.”

Event sponsors Alexion Pharmaceuticals Inc. and Higher One CARES each provided special prizes by category for the second year in a row.

A complete list of participating nonprofits and prize winners is available at www.thegreatgive.org.

The Great Give® is the annual online giving event on giveGreater.org®, a local resource for learning and giving created in 2010 by The Community Foundation for Greater New Haven to increase philanthropy in the Greater New Haven region of South Central Connecticut. Donors wishing to support their favorite cause or charity can visit the giveGreater.org® website to find information on 328 nonprofits, including their mission, governance, programs, financials and community impact.

Thanks to the generosity of three generations of donors, The Community Foundation for Greater New Haven awarded more than $22 million in grants and distributions in 2014 and has an endowment of over $460 million through hundreds of individually named funds. In addition to its grantmaking, The Community Foundation helps build a stronger community by taking measures to improve student achievement, reduce New Haven’s infant mortality rate, promote local philanthropy through www.giveGreater.org and encourage greater understanding of the region at www.cfgnh.org/learn. For more information, visit our website at www.cfgnh.org, find us on Facebook atwww.facebook.com/cfgnh or follow us on Twitter at www.twitter.com/cfgnh.

Glad to see some Wallingford entities in the mix this year.

LISC is a partner in Grants for Growth, a new $1 million grant program announced by Uber and Visa. Grants for Growth will provide $10,000 grants to 100 restaurants in 10 U.S. cities that are currently active on Uber Eats. LISC will administer the grant program, which will bring much needed relief to restaurants challenged by COVID-19, natural disasters and other unexpected events.