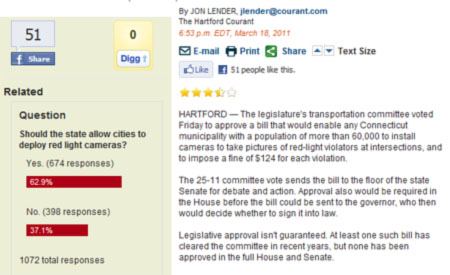 A new bill allowing cities to install intersection safety cameras, which issue tickets to vehicles that do not obey red light signals, has passed the Transportation Committee by a vote of 25 to 11. Text and other information about the bill, currently labeled S.B. 706, may be found here on the Connecticut General Assembly's website. There are many supporters of the bill this year, including Toni Walker and Roland Lemar, state representatives from New Haven. The bill is also supported by Bike Walk Connecticut, the state's largest bicycle and pedestrian advocacy organization.

The Hartford Courant reports at http://www.courant.com/news/politics/hc-red-light-cameras-0319-2011..., and links to an online poll (shown here) which, with 1,072 votes recorded, indicates support for the devices. An excerpt from the Courant's coverage:

The legislature's transportation committee voted Friday to approve a bill that would enable any Connecticut municipality with a population of more than 60,000 to install cameras to take pictures of red-light violators at intersections, and to impose a fine of $124 for each violation.

The 25-11 committee vote sends the bill to the floor of the state Senate for debate and action. Approval also would be required in the House before the bill could be sent to the governor, who then would decide whether to sign it into law. Legislative approval isn't guaranteed. At least one such bill has cleared the committee in recent years, but none has been approved in the full House and Senate.

According to the Courant, the towns of more than 60,000 people in Connecticut are Bridgeport, New Haven, Hartford, Stamford, Waterbury, Norwalk, Danbury, New Britain, West Hartford, Greenwich, Hamden, Meriden and Bristol.

Click here for our coverage of previous years' legislation, and here for an earlier summary from the Tri State Transportation Campaign.

A group called CT Safe Roads has launched a website to help advocate for the devices. If you support the use of intersection safety cameras, which are currently deployed in more than 400 U.S. cities and have been shown to be extremely effective at reducing deaths caused by red light running, please visit the website and email, call or set up a visit with your state representatives. Several well-written op-eds supporting the cameras can be found in Connecticut's newspapers, including the Courant, Bristol Press, and New Haven Register.