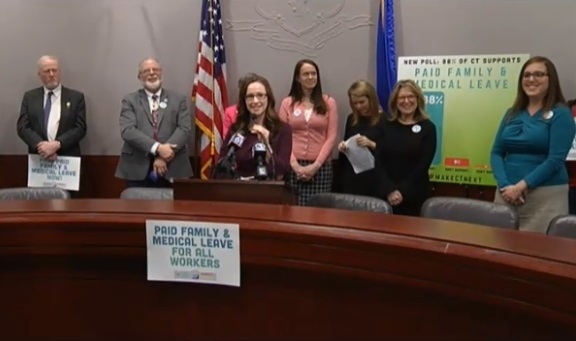 The United States, unlike the rest of the industrialized world, does not guarantee workers paid time off to care for newborns. For many families, the resulting loss of income forces them take on debt and turn to public assistance. The lack of paid leave is also a major contributor to the wage and wealth gap between men and women.

That situation is about to change in Connecticut, thanks in large part to the advocacy leadership of The Connecticut Women’s Education and Legal Fund. (CWEALF), the leader of the Connecticut Campaign for Paid Family Leave. Years of advocacy work succeeded this month when the legislature approved legislation guaranteeing 12 weeks of paid family leave in one of the most generous paid leave bills in the country.

“This is a critically important part of women’s economic security, which is at the core of CWEALF’s public policy agenda,” said CWEALF Deputy Directory Catherine Bailey.

Bailey added the new legislation helps the state compete for young workers because Connecticut is surrounded by states with paid family leave protections.

“This is also a policy that Millennials say is important to them,” says Bailey. “We have to compete to keep them here.”

The Connecticut Women’s Education and Legal Fund. (CWEALF) is a longtime nonprofit partner of the Community Fund for Women and Girls, a leadership initiative of The Community Foundation for Greater New Haven. A recent grant from the fund to CWEALF is supporting the Bi-lingual Community Advocacy Project, which provides under-served Latina populations with legal information, referrals to partner agencies, cooperating attorneys and community education. CWEALF also coordinates the Connecticut Collective for Women and Girls, a statewide partnership that works to address gender inequity. Continue reading.