OneWorld Progressive Institute, Inc is a 501(C)3, 100 percent volunteer organization serving Greater New Haven and the broader CT community since 1996.  We produce three categories of television programs: health literacy, education and civic engagement. We also produce community forums and engage students in critical-thinking forums, an oratory competition and radio discussions. What we do depends largely on what we can financially afford to do. We welcome your financial and technical support. Visit our YouTube channel at: https://goo.gl/q3YhD6   Please visit and "like" our Face Book here: http://goo.gl/8v19VB

In the third trial for officers involved in the death of 25 year-old, Baltimore native, Freddie Gray, the driver of the van in which Gray was transported to jail walks free.

In this space weeks ago we pointed out that the city of Baltimore paid the Gray family $6.4M as compensation in his wrongful death, and that would be it. Officer Goodson, the driver, was facing the most serious charge.

Giving rough rides to those arrested is a known practice by police across the country. It’s how those in custody are often punished by police; Mr. Gray did not stand a chance in hell. According to the police, he was resisting arrest. How dare he!

We should not forget that judges are a part of the Judiciary.  In this case – a single judge; there are no juries to deliberate; the judge decides; it all seem to be foregone verdicts. Judicial careers are often built upon the types of verdicts handed down and on successful prosecutions made. 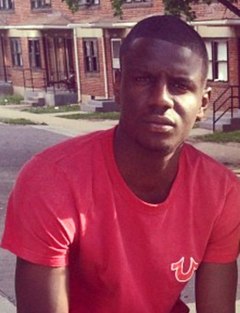 For Ms. Marilyn Mosby, the state’s attorney, the not guilty verdicts raise an obvious and painful question: "Can she go forward with the rest of the prosecutions? Four more trials — including a retrial of Officer William G. Porter, whose first trial ended with a hung jury in December — remain. (Officer Nero was acquitted of four charges last month.) Several lawyers who attended the trial said Ms. Mosby must now rethink her strategy." At left is a picture of a healthy Freddie Gray.

"On April 12, 2015, Freddie Carlos Gray, Jr., a 25-year-old African-American man, was arrested by the Baltimore Police Department for possessing what the police alleged was an illegal switchblade.[2] While being transported in a police van, Gray fell into a coma and was taken to a trauma center.[3][4] Gray died on April 19, 2015; his death was ascribed to injuries to his spinal cord.[4] On April 21, 2015, pending an investigation of the incident, six Baltimore police officers were suspended with pay.[3] Wikipedia

Investing in Good Health and Well-being

As part of our Impact Notes Social Bond Framework, we are beginning a short series to illustrate how investments in the Impact Notes advance the UN Sustainable Development Goals, starting with April’s SDG Goal of the Month – Good Health and Well-Being.