And in 2015, when so many areas in America are in racial turmoil, she returned to the Indian Wells Tennis Tournament. Just to be certain she would be safe, security guards were strategically placed throughout the stadium: a sad but necessary commentary, and precaution, in 21st Century America.

Read what the New York Times had to say about her return: "Serena Williams Strikes the Right Note in a Time of Turmoil." This is a great story on so many levels.

Serena was only 19 years old when she won the Indian Wells Tournament in 2001 and vowed never to return after she and her entire family were viciously attacked by racist taunts and boos that lasted for hours. She walked back on that court at age 33, and after recuperating from a life-threatening illness, and she won her first match against

Richard Williams, Serena's father, wrote about the abuse his daughters endured that day in 2001: “My daughters were treated without an ounce of dignity or respect,” he wrote. “They were treated like criminals.”

"Richard Williams added the extra dynamic of power, and that, as much as anything else, set off many fans at Indian Wells 14 years ago. A black man controlling the product in an almost all-white, country club sport was bad enough. Possibly exercising the power that went with that control seemed to be too much to bear. The result was outrage from the fans, followed by a boycott from the Williamses.

Acts of racism must be punished whenever they occur, and while we certainly can forgive — African-Americans have been in the forgiveness business for centuries — one can still make sure there are consequences.

In this case, the consequence would have been one of the greatest players in tennis history sending a painful but clear message to a community that she felt had wronged her and her family.

On the other hand, journalists sit on the sideline and record — even cheer — acts of defiance by athletes ranging from Muhammad Ali, Tommie Smith and John Carlos in past years to today’s athletes wearing “I Can’t Breathe” T-shirts to protest police brutality.

These acts of defiance carry consequences; there is a price to be paid for challenging the status quo. Just ask anyone who has." What does this say about America as a society? http://www.nytimes.com/2015/03/13/sports/tennis/serena-williams-str...?

A Victory for Both Serena Williams and Indian Wells (William C. Rhoden 3/14/15) 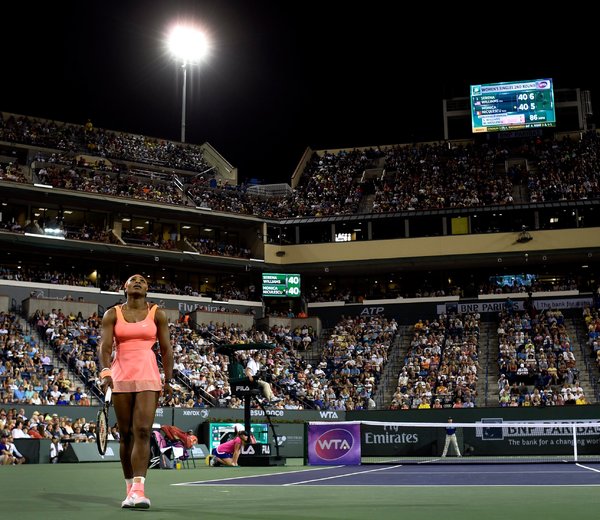 INDIAN WELLS, Calif. — Ray Moore sat in an office at Indian Wells Tennis Garden Stadium on Friday evening, the picture of a weary but contented man.

Thirty minutes earlier, Moore, the 68-year-old chief executive of the BNP Paribas Open, had watched Serena Williams complete a hard-fought, 7-5, 7-5 victory over Monica Niculescu on a night of heartfelt emotions as fans celebrated a great champion’s return to the tournament after a 13-year absence.

“I’m so happy,” Moore said. “So happy that this happened, I really am. I’m delighted. It was a great evening for Serena and for us.”

Moore started the process of trying to bring back one, if not both, of the Williams sisters two years ago. No matter how large and prestigious the tournament had become, the absence of Serena and Venus — indeed, of the Williams family — had become a source of embarrassment and, for Moore, discomfort. “It was not a great feeling,” he said. “It left a bitter taste in my mouth.”

He was in the stands that March evening in 2001 when Richard and Venus Williams were showered with boos as they entered the stadium to watch Serena, then 19, play in the championship match, which she won.

Moore is still not certain how much of a role racism played in the outpouring of venom during the match, or how much was boorish, entitled behavior. He just knows that the fan behavior was outrageous and unacceptable. He said he would never forget the intensity of the booing. “Not three minutes, not five minutes, but for hours,” he said. “It was a very ugly incident.”

From Moore’s perspective, having Serena back was an act of cleansing.

“It’s a way of kind of deleting it from your history,” he said. “It was a terrible day.”

Moore added: “The incident in 2001 had no winners that day. We as a tournament lost big time; we lost two of the greatest athletes. The community lost, having that stigma that this is a racist community. Personally, I think the Williams family lost because they never got to play, arguably, in one of the best tournaments, and they could have rewritten more record books.”

You can’t really delete history, or at least you shouldn’t. Moore agreed but added, “While you can’t delete it, I want to tell you, it feels great that she’s back.”

Serena seemed genuinely happy, and relieved as well. In what had to be a first in her illustrious career, she wept as she entered the stadium and heard the ovation.

“At that moment everything had just — I just felt so good to be out there,” she said. “I felt like I made the right decision, and I knew I wanted to do it. I knew I really wanted to do it.”

Williams conceded that even though she had announced her return in February, she had doubts about it as late as Friday night when she walked out to warm up for her match. There were debates — and there will continue to be debates — over whether she should have returned. There no longer is a debate in her mind.

“Up until that moment, I didn’t really know if it was the right thing for me to do,” she said. “And receiving the love from the crowd here, it really meant a lot to me.”

She added: “I feel like I’ve already won this tournament. I don’t feel like I have to actually hold the trophy at the end of this. I feel like I’m already holding up a trophy. I have never felt that way before.”

I asked Moore if he thought Venus would ever return. He said that seemed far less likely. “Venus has had stronger words about that day,” he said. “She’s had stronger words and a stronger opinion. She has said publicly: ‘I’ll never go back there again; don’t even talk to me about it.’

He added, “I’m just so happy that Serena’s back.”

He described her return as a “reaffirmation.” (Of what exactly -- is a question Mr. moore should have been asked)

“We don’t believe that this community is racist,” he said. “I don’t think you can paint the community with one brush.” (All it takes for evil to thrive is for people of goodwill to do nothing.)

The evening was wrapped in warmth and, realistically, it was what one would expect from a community of fans that had been painted with the brush of intolerance and bigotry and had been waiting to prove that it had evolved. Just in case, however, Moore said that security guards were strategically placed throughout the stadium.(As you read this article, with all of its positive notes, please also reflect on this statement by Mr. Moore; this is California, USA, March 2015.  Sadly, I am glad the guards are there.  There should be no chances taken with her safety. It's SAD)

“What I said was if anyone dares boo, the crowd will shut them down,” Moore said. “But if somebody yells any racist remarks or makes any reference, that person is going to be ejected. Our security was ready for that.

“There weren’t surprises,” he added. “We were ready if there was going to be anything. We were prepared.”

For all the talk about forgiveness, there is a lesson here — not just about the importance of being forgiven, but also about the equally important, and very much overlooked, aspect of the forgiven being truly repentant.

After about 20 minutes, a member of the tournament staff informed us that Serena Williams was about to enter the interview room. Moore added a final thought about 2001. “It’s unfortunate that it happened; I’m glad she’s back,” he said. “This was a good day in the history of our tennis tournament.”

And a great day for the community of Indian Wells.

Other related coverage of the Serena Williams story

Serena Williams Gets a Win and an Ovation in Her Return to Indian Wells, MARCH 14, 2015: http://www.nytimes.com/2015/03/14/sports/tennis/serena-williams-gets-a-win-and-an-ovation-in-her-return-to-indian-wells.html