This is an opportunity for Civic and Community Engagement - The Issue of the Confederate Flag, still being flown in some American cities, has been a source of great angst for many Americans, and in particularly for African Americans.  OneWorld Progressive Institute, Inc invites a community discussion / forum on this issue. Please feel free to post your perspective in the form of a comment in the section provided below.  We invite you to read the article in the New York Times along with some of the other posted links, perspectives and other historic information provided here through a range of links.

The Confederate battle flag outside of the state house in Columbia, South Carolina, in 2012. Chris Keane/Reuters 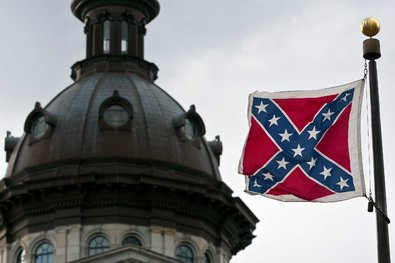 "As Charleston, S.C., mourns the racist murders of nine black people in a historic church, many people find it particularly galling that the state’s capitol displays the Confederate battle flag, a symbol of a regime that the suspected killer is said to have celebrated. Even officials in as conservative state as Texas ruled that it could be considered too offensive to be allowed on license plates, a position upheld by the Supreme Court.

But many say it is a symbol of the South’s heritage, culture and military pride and can be displayed without any sense of racism.

Does displaying the flag show historic appreciation, or is it a symbol of a reviled era, that breeds racism and should not be officially approved?"

In South Carolina today two flags (state and national) have been lowered to half-staff in honor of the 9 Americans killed in yesterday's racial massacre.  The Confederate flag has not been lowered.  The state is governed by Republicans.  At the State House in Columbia no one has lowered the Confederate Flag. As an American, what message does the Confederate flag conveys to you? Does it convey different messages to Black and White Americans? Should it still be flown on government buildings? The New York Times article linked here sheds light.  Meet the Debaters

OneWorld invites you to discuss this issue with family members, colleagues, friends, neighbors

Some say the Confederate battle flag breeds racism and should not be displayed. Others say it's merely a historical symbol.

A Trademark for Racism, Despite Its Historic Appeal

Kareem U. Crayton is associate professor of law at the University of North Carolina School of Law.

A Matter of Pride and Heritage, Not Hatred

Ben Jones is the chief of heritage operations for the Sons of Confederate Veterans.

A Symbol of Intimidation

The Message Is Clear for African-Americans

Brentin Mock, Citylab  Brentin Mock is a reporter for The Atlantic's Citylab.com. He previously tracked hate groups for the Southern Poverty Law Center's Intelligence Report magazine. He is on Twitter.

"A Confederate flag is still flying on the grounds of South Carolina's state capitol, even after a white gunman killed nine black churchgoers at an AME church in Charleston, S.C. Here's a closer look at why the flag isn't at half-staff or even off the grounds completely." (Jorge Ribas/The Washington Post)

How The Charleston Shooting Is Linked To The Confederate Flag, According To A South Carolinian - by Jack Jenkins Posted on June 19, 9:32am

"But one of the people who’s okay with the flag is South Carolina’s Republican Governor Nikki Haley, who defended the flag’s presence during last night’s gubernatorial debate, on the grounds that it hasn’t affected the economy. (The flag is dedicated to the men who served and died for South Carolina during the Civil War.)

“What I can tell you is over the last three-and-a-half years, I spent a lot of my days on the phones with CEOs and recruiting jobs to this state,” Haley said. “I can honestly say I have not had one conversation with a single CEO about the Confederate flag.”

And why is it okay? Because South Carolina solved racism!  See YouTube video linked below

http://www.mediaite.com/online/sc-governor-defends-flying-confedera... Confederate flag, your time is up - By Danny Cevallos, CNN Legal Analyst

Why South Carolina's Confederate Flag Is Still Flying at Full ...

OneWorld Progressive Institute, Inc., is a small group of committed volunteers who produce community information and education television programs on health literacy, education and civic engagement.  We also find good information and post informative blogs about issues we believe shine light and are beneficial to many in our communities.  Learn more about us at our web site: www.oneworldpi.org/  and visit our Civic Engagement section at: http://www.oneworldpi.org/civic_engagement/index.html We are about Community Involvement & Public Good and we work to make Positive contributions to our community.

Please share our information with others.  Watch our informative television programs on your public access channels: Frontier (formerly AT&T), Channel 99, drop down; Charter Communications Chan. 21, and Comcast (Xfinity) Channels 10, 15, 18 & 26.  In Hamden, New Haven and West Haven find us Mondays at 8pm on Comcast, Xfinity, Channel 26.  Please “like” us on Face Book