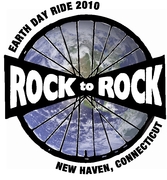 This Friday come out to  Rock to Rock Earth Day Happy Hour 5-7pm. All Welcome!  Rock to Rock is on Saturday April 30th and is a day-long celebration of Earth Day and New Haven's rich environmental and cultural resources. A few hundred cyclists will travel between West Rock and East Rock, with celebrations on both sides of the city. Along the way, they will eat tasty food, hear great music, take on environmental challenges and service projects, and explore the city's parks.