We feel that a single, small entrance discourages people from using the park. We would like to double the width of this entrance and to create a second entrance at Derby and Winthrop. We will also create a transition from the sidewalk to the grass by installing a bed of pavers at each entrance. These three changes—doubling the width of the existing entrance, adding a second entrance, and installing the transitions—will make the park more enticing and encourage people to use it. Whereas the current entrance, narrow and unadorned, works to keep people out of the park, the new, welcoming entrances will invite people to cross the street and enter into and enjoy the park. The resulting increased use of this public space will make the neighborhood safer and more vibrant.

The other component of our project focuses on the centerpiece of Monitor Square, a monument topped by a statue of an eagle. This eagle is dramatic to behold, with wings spread, talons raised, and head staring down. (We think it is the most amazing sculpture in any park in New Haven, but we may be slightly biased.) 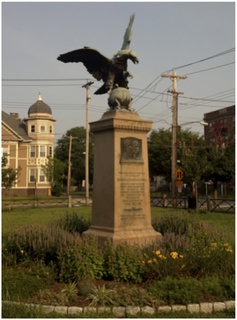 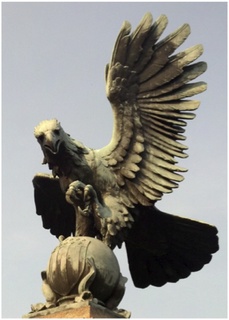 At nighttime, this great New Haven asset loses its value because it is all but invisible in the unlit park, and we would like to correct this by lighting the sculpture up from below. The site of the eagle lit up against the nighttime sky will be eye-catching for both pedestrians in the neighborhood and drivers heading west on Chapel or Derby.

Monitor Square is a nicely scaled public space, about one-third of an acre, situated on thoroughfares that connect downtown with the western side of the city. It sits at the intersection of three neighborhoods—West River, Edgewood, and Dwight—and is bordered by Chapel Street, Derby Avenue, and Winthrop Avenue. 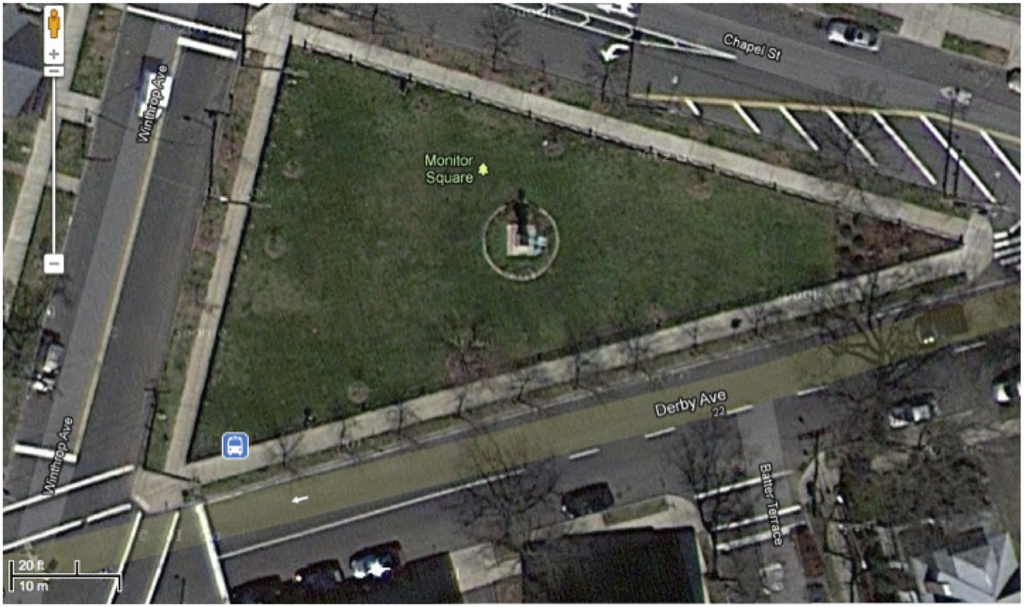 The story of our work in Monitor Square is part of the larger story of our work to improve the West River neighborhood. In 2008 the Community Foundation chose West River as a site for its Neighborhood of Choice program, and under the guidance of Kevin Ewing, ordinary residents began to come together, get to know one another, and explore ways to improve the neighborhood. At the very start of this effort, Monitor Square was the site of a tragic murder. On the evening of Sunday, June 29, shortly after midnight, 53-year-old Antoinette Joyner was struck and killed by a stray bullet as she sat on a porch overlooking Monitor Square petting a cat. This was one of the key reasons we decided that improving Monitor Square should be part of our efforts to improve West River.

In 2009 we successfully applied to have Monitor Square designated a Community Greenspace site by Urban Resources Initiative. We have just completed our fourth season as a Community Greenspace site, and over the course of those four summers we have transformed Monitor Square. We have built two flowerbeds, one at the corner of Chapel and Derby and the other around the monument in the center of the park. We have planted seven trees within Monitor Square and another seven on the curb strip around it. In the past two years, our efforts have spilled out to the surrounding blocks. There are ten new trees on curb strips across the street from Monitor Square, and last year we built a flowerbed in front of an adjoining apartment building. We’ve even extended our efforts to a site three blocks away, at the corner of Derby Avenue and Ella T. Grasso Boulevard. There we removed a huge stand of weeds, planted five trees, and built a flowerbed around a sign that welcomes people to New Haven.

You might find this FREE resource helpful for your project: http://blockee.org/