THIS IS A CALL TO ACTION AGAINST The GOP'S
DISGRACEFUL CONDUCT: GOP SENATORS ACTING LIKE THUGS
• Donald Trump is not the only Republican espousing violence against those who oppose him.

ALL dignified Americans should SPEAK OUT against what Republicans are doing.
• On Monday, John Cornyn, the senior Republican senator from Texas,
• Warned President Obama (THIS WAS A THREAT) that if he dares to name a successor to Justice Antonin Scalia of the Supreme Court,
• THE NOMINEE “will bear some resemblance to a Piñata.”

• “Violent imagery has been commonplace in political statements for a long time, but even so, it is disgraceful for a senator to play the thug, threatening harm to someone simply for appearing before Congress to answer questions about professional accomplishments and constitutional philosophy.
• In 1988, there was a similar concern for the Democrats who controlled the Senate when President Ronald Reagan nominated Anthony Kennedy to the Supreme Court.
• Unlike today’s Republicans, the Democrats held hearings for Mr. Kennedy and, after finding that he was qualified for the job, voted unanimously to confirm him."

• Ever since the President Obama was elected, leading Republicans have behaved like THUGS towards him; treating him with utter disrespect and doing everything possible to PREVENT the President from achieving his objectives. These objectives are in the best interest of the American people.

It's time the Republicans who are being very obstructionist and grossly disrespectful of the office of the President of the United States hear from millions of us, the American people.
• This IS DISGRACEFUL! Where are members of the National Media?
• They are busy covering every word Donald Trump utters
• WHILE OUR DEMOCRACY FALLS APART.
Please read more in the NY Times article linked here. This is outrageous! 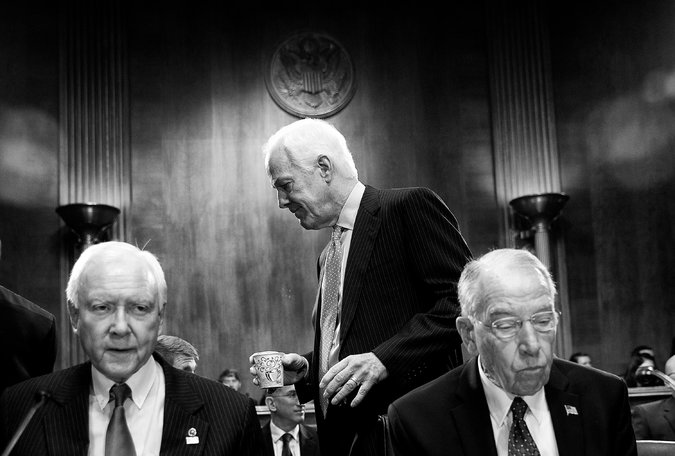 Sen. John Cornyn walking past Sen. Charles Grassley, right, and Sen. Orrin Hatch during a Senate Judiciary Committee hearing on Thursday. Credit Doug Mills/The New York Times "For a while, Republican leaders were saying that delaying the nomination until after a new president takes office would respect the “people’s voice” on this critical appointment. Now some, like Senator Ron Johnson, Republican of Wisconsin, are admitting that it would be “a different situation” if a Republican were currently in the White House. “Let’s face it,” he said in a radio interview on Thursday morning, “I don’t think anybody’s under any illusion. President Obama’s nominee would flip the court from a 5-to-4 conservative to a 5-to-4 liberal-controlled court, and that’s the concern.”
What about the law and the President's right to nominate qualified judges to be brought before the Judiciary Committee of the Congress? These Republicans could care less about the voice or the will of the American people, except for those who agree with them.
Presently, there are at least 14 other Court nominees sitting for months without a hearing being called because the GOP are obstructing every appointment President Obama makes that has any significance at all. Why is this allowed? Why aren't other mainstream media (in addition to the New York Times) asking questions and challenging this despicable behavior?  How can the President be judged fairly on his accomplishments?  How can he get his job done when he is being blocked at every turn by concerted obstructionists? Elected officials need to be held accountable for dereliction of duties.
SUGGESTED ACTION: We want to write short, specific statements at designated places online.  There will be one CALL-to-Action on N'Zinga Shäni's Face Book page.  Other people can also start Call-to-Actions. We will ask thousands to sign them and then send them to:  the NY Times, ABC News, NBC News, The Nation, The Washington Post, The New Yorker Magazine, CBS News, MSNBC, NPR, the NHI and all other leading media outlets.
Various groups and individuals can draft their own statements.  We must take action.  This is a democracy. The leaders of the GOP are acting like dictators.  Please keep watching for our notice to go up sometime this week. This is a matter of civic engagement; it is important.  Thank you all. http://www.nytimes.com/2016/03/11/opinion/republican-threats-and-th...?

Give a Ride, Close a Gap

In a blog describing the new $11 million Vaccine Access Fund, a partnership of LISC, Uber, Paypal and Walgreens, LISC's President & CEO Lisa L. Glover details how the fund tackles more than the transportation gap that is keeping tens of thousands of Americans from accessing COVID-19 vaccines. "The fund offers a practical solution to an immediate problem," writes Glover. "But this is absolutely part of our larger efforts to address equity as well."