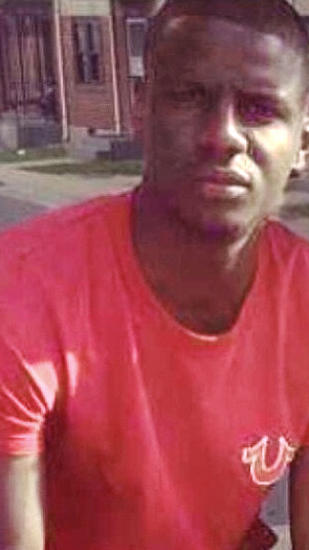 Freddie Gray is the 25 year-old African American man who was arrested by Baltimore Police on April 12, 2015. Reports say Gray was arrested in view of many people after police claimed that after making eye contact with officers, Gray tried to flee from them. While in custody, he suffered a severed spine and crushed voice-box, and died a week later. Daily protests culminated Saturday with a large and mostly peaceful gathering that turned destructive on the west side and outside Camden Yards, where fans attending a game against the Boston Red Sox were temporarily not allowed to leave for safety fears.

"When a handcuffed Freddie Gray was placed in a Baltimore police van on April 12, he was talking and breathing. When the 25-year-old emerged, "he could not talk and he could not breathe," according to one police official, and he died a week later of a spinal injury.

But Gray is not the first person to come out of a Baltimore police wagon with serious injuries.

Relatives of Dondi Johnson Sr., who was left a paraplegic after a 2005 police van ride, won a $7.4 million verdict against police officers. A year earlier, Jeffrey Alston was awarded $39 million by a jury after he became paralyzed from the neck down as the result of a van ride. Others have also received payouts after filing lawsuits".

It's clear from various reports that Baltimore Police have a reputation for giving some they arrest a "rough ride" to the station house.  The Baltimore Sun article linked below provide some details. This being known most likely accounts for some of the pent up anger; that anger should be directed at the police and therefore at demanding answers; looting, rioting and destroying the property of other citizens cannot be justified; regardless of the complaint.

Mr. Gray died April 19, a week after he was arrested by Baltimore police. Gray suffered severe spinal cord injuries while in police custody.  The six police officers who accompanied him in the police transport vehicle now say he was not strapped into the transport container as he was supposed to be. Of course, citizens of Baltimore and Mr. Gray's family, and every American have the right to honest and truthful answers from the police. But what happened after the mostly peaceful march on Saturday serves no useful purpose and set back the calls for justice.

Freddie Gray’s  services are set for 11 a.m. on Monday at New Shiloh Baptist Church, 2100 N. Monroe St.  It was reported today that representatives from the White House will be attending.

Attendees will be Broderick Johnson, assistant to the president and Cabinet Secretary, who also chairs the administration’s My Brother’s Keeper task force. Johnson, a Baltimore native, will be joined by Heather Foster, an adviser in the Office of Public Engagement. Elias Alcantara, with the Office of Intergovernmental Affairs, will also attend.

Windows were smashed, police were pelted with bottles, and several protesters were arrested as a peaceful rally unraveled in Baltimore. Demonstrators were demanding justice for Freddie Gray, who was fatally injured in police custody. The had a right to demand justice, but what we saw on television only provide excuses for those who want to subvert justice; it's unfortunate.

As is evident in the video, those who were smashing car windows were clearly being destructive.  No one should be allowed to use this occasion to act out their penchant for vandalism; this is sad and outrageous.

After the protests, calm sought for Gray's burial

As Freddie Gray's family prepared to bury him on Monday, officials reiterated their calls for calm after a massive demonstration on Saturday left some businesses and cars vandalized, 34 people arrested and a city on edge over the 25-year-old's death from injuries sustained in police custody. 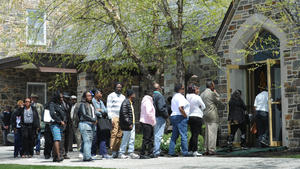 People proceeding in an orderly manner  at the viewing of Mr. Gray's body.

President Barack Obama will send three aides to represent his administration at the funeral services for Freddie Gray, the White House said Sunday.

This video shows 6 mins of lawlessness and sheer mayhem:   https://youtu.be/st4IHokD4Jc

Vandals set back the fight for justice when they use violence and mayhem to disrupt peaceful protests.  Nothing can be achieved when the voices of reason are drowned out by lawlessness. What we saw on video in Baltimore this past weekend denigrates the memory of Freddie Gray and achieves nothing for those who are demanding accountability from the police. In fact, it only justifies the perception of those who seek justification for the violence perpetuated against black men by some law enforcement officers.