Across many measures, New Zealand appears to be doing well: Its people are relatively healthy, well educated, and socially connected; material standards of living are high; and the unemployment rate is trending downward and is just below 4 percent.

But the country still faces significant challenges: Tens of thousands of children are living in poverty; young people in particular are struggling with their mental health; the rates of family violence are among the worst of Organisation… With proper treatment and a wide range of support, people with serious mental illness can maintain their independence and lead productive lives.

On a typical day, Fellowship Place offers this broad support to more than 150 people who visit the campus for meals, case management, and other activities such as working in community gardens courses.…

A USER’S GUIDE TO THE PROCESS

Did you know that New Haven has over 40 different volunteer boards and commissions? Being on a City board or commission is a great way to serve your community while developing civic knowledge and leadership skills. The following user's guide leads you…

Is 110 hours of mandated testing demoralizing students? How could it not?

In August, the nightmares start.

Every teacher experiences the excitement, worry and sometimes dread as the first day of school approaches. It’s a combination of Christmas Eve and April 14.

Like most teachers, I spent my summer carefully crafting lesson plans. I spent weeks reading YA books and worked diligently on creating a week’s worth of team building activities to start the year with a positive classroom environment.

Greta Thunberg isn't alone. Meet some other young activists who are leading the environmentalist fight

(CNN)Greta Thunberg has become a household name since she began her climate strikes in 2018, inspiring thousands of students to walk out of class and demand action on the climate crisis.…

Job Posting for the Executive Director of CitySeed

CitySeed is a dynamic, community-based nonprofit organization based in New Haven, Connecticut, whose mission is to engage the community in growing an equitable, local food system that promotes economic development, community…

Seyfarth synopsis:  ADA Title III lawsuits flooded federal courts in 2019 and will likely continue to do so in 2020 with new theories for the courts to consider.

NYT Opinion: The Injustice of This Moment Is Not an ‘Aberration’

Ten years have passed since my book, “The New Jim Crow,” was published. I wrote it to challenge our nation to reckon with the recurring cycles of racial reform, retrenchment and rebirth of caste-like systems that have defined our racial history since slavery. It has been an astonishing decade. Everything and nothing has changed...… 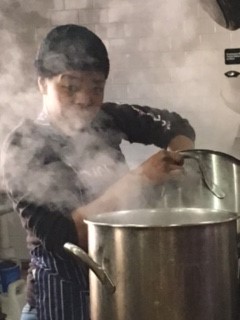 A cheerful, clean, safe, and reliable place to eat is not a privilege but a human right. Community Soup Kitchen been guided by that belief for more than four decades, serving regular meals to our hungriest neighbors at churches and other locations in New Haven. A recent general operating support grant from The Community Foundation helped…

Funding opportunities at The Community Foundation

Can Applesauce Help Close The Racial Health Gap? No, Wait, Hear This Chef Out

For many people, a package of applesauce is simply a convenient lunchbox staple or a snack you turn to when you're feeling sick or can't keep much else down. But when Tunde Wey looks at applesauce, he sees a tool for social justice...…

Time Magazine: Donald Trump Is the Result of White Rage, Not Economic Anxiety

While the economic anxiety of Trump supporters is often touted as the driving force behind the mogul’s electoral college victory, that rationale is just a ruse, a clever red herring. The…

An annual tradition on New Year's Day -- jump into Long Island Sound and raise money for your favorite park or your non-profit. Elm City Parks Conservancy will be offering an incredible brunch, children’s crafts, hot tubs for the plungers, live music, Tea-Cup Raffle, and Lighthouse Tours.

Elm City Parks Conservancy is excited for the New Year’s 2020 Plunge for Parks and looks forward to welcoming both old and new plungers this year. Attached is the Waiver and Registration form…

We Love What Makes You Unique

Your perspective fuels our mission-driven work at United Way of Greater New Haven. We are committed to inclusion across race, gender, age, religion, identity, and experience.

Who We Are Looking For

Are you a finance professional who enjoys working with colleagues from all departments and being an integral part of making an organization work? Do you find joy in…

The Tragedy of the Yale Commons

When 18-year-old Stephen A. Schwarzman, the son of a Philadelphia dry-goods store owner, entered Yale in 1965, he took his meals, like all freshmen, in the Commons, a vast, baronial dining hall in a cluster of beaux-arts colossi that the university had constructed for its bicentennial in 1901. The Commons seemed to him like “a train station full of hundreds of people eating,” he recalls in his recently published business memoir, …

Get the 2020 Neighborhood Leadership Application here