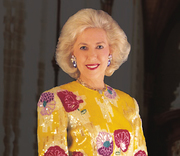 Southern Connecticut State University will present a concert by the “First Lady of the Organ,” Diane Bish, on April 9, at 7:00 p.m. Bish will perform organ favorites and original hymn arrangements at Yale University’s Battell Chapel, along with a choir composed of local vocalists, including members of the Heritage Chorale and other area groups.

Acclaimed organist Bish performs at famed cathedrals, concert halls and churches around the world. For 25 years, she has aired her dazzling performances to over 300 million people internationally on her television program, The Joy of Music. Her performances of classical and sacred music link her to legends like Leonard Bernstein and Eugene Ormandy. Bish was the first American woman to record on the four organs of Freiburg Cathedral, Germany.

The Boston Globe said of a Bish performance, “Her playing is virtuosic and solidly musical…she blasted the crowd out of its pews in a whooping standing ovation.”

In 1989, Bish was awarded the National Citation by the National Federation of Music Clubs of America, the Federation’s highest honor. She is known as the “First Lady of the Organ” because of her unparalleled achievements. Bish’s book, Church Music Explosion, describes her personal philosophy of excellence in church music. She has numerous recordings and is also a composer and conductor.

Tickets are $35, $20 and $5 for students. Group packages are available. For tickets or more information, call the Lyman Center box office at (203) 392-6154 or visit tickets.southernct.edu.

A premium package is also available for $100 and includes a special private reception with Bish on April 8 at SCSU, a photo opportunity, an autographed copy of her CD On Tour, and premium seating at the April 9 concert. Call (203) 392-5598 for details.

All proceeds from the event will support arts programs at SCSU.

RSVP for Concert: Diane Bish, First Lady of the Organ to add comments!

A Playbook for Our Future: LISC Unveils Its New Policy Priorities

Strong public policies have always been critical to promoting affordable housing, economic development, health and jobs. But the urgency surrounding these issues today is unprecedented. LISC SVP for Policy Matt Josephs zeroes in on the goals of LISC’s federal policy agenda for the coming congressional term in a blog highlighting proposals that tackle gaps in health, wealth and opportunity affecting millions of families and their communities.

A New Partnership to Inject $1M into Toledo Affordable Housing

An exciting commitment to LISC from Owens Corning brings $1M in badly needed capital to boost affordable housing development and support historically underinvested neighborhoods in the Glass City. A report from NBC describes how the work funded will focus on racial equity and health outcomes, and puts a spotlight on the trusted role of LISC Toledo.

Creative Solutions: A Roundtable on Arts, Culture and the Path to Community Recovery & Wellbeing

In a roundtable interview, two LISC experts and two members of LISC’s Emerging Leaders Council offer reflections and critical best practices for harnessing arts and culture as part of our national recovery—from the economic devastation of COVID, and from the country’s long-standing racial health, wealth and opportunity gap.